"We've got a problem on our hands. As many of you know, just yesterday a group of Toons found a secret entrance into the depths of our biggest threat yet: The Lawbot HQ."
―Lord Lowden Clear[src]

On June 26, 2014, the Lawbots introduced a court hearing at the Courthouse that represented the first case of a Toon on trial. This hearing involved famous inventor Doctor Surlee in which he was placed on trial for violating the Toon Council's teleportation restrictions and implementing his own bypasses into the portable hole system of which he originally invented. Despite having been exposed of his diary entry and a blueprint that shows the inner-workings of his bypasses, Doctor Surlee managed to escape from the Courthouse using one of those bypasses.

The update introduced an ARG puzzle where players had to decrypt a blog post titled "03-CV-0012 SURLEE v. COUNCIL". Once players decrypted the blog post, Doctor Surlee's portable hole blueprint was found but also acquired more decryption. In-game coordinates of the bypasses could then be determined based on the blueprint, which allowed Toons to teleport from one area to another until they gained access to Lawbot Headquarters. Using the bypasses, a single message from "The Two" appeared when a Toon teleported to Sellbot Headquarters and Cashbot Headquarters, with the following three messages appearing as the Toon teleported to Lawbot Headquarters.

"They are indeed quite clever."
"Perhaps, however I don't believe they realize what they have unfolded."
"I don't think you have either."

The courtyard is the main area of Lawbot Headquarters. Cogs here range from level 8 to level 10. The Courtyard is surrounded by very tall skyscrapers and marble buildings. To the north is a large statue of the Chief Justice. The Lawbot Courthouse can be found on the left side of the Headquarters. Opposite to the Courthouse is the entrance to the District Attorney's Lobby, in which there are no Cogs. 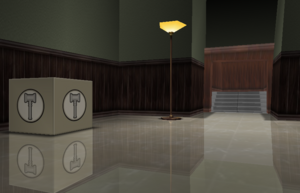 The Chief Justice, commonly known as the C.J., is the boss of the Lawbots. Toons may battle him after completion of the Lawbot Cog Disguise and have earned enough Jury Notices for a promotion.

A Cog Summon is awarded to Toons that successfully defeat the Chief Justice in the trial. There are three types of Cog Summons: a single Cog summon, a Cog Building summon, and a Cog Invasion summon. Invasions cannot be called if another is already in progress, but buildings and Cogs can be summoned at any time.

The Lawbot Cog Disguise is a Cog Disguise containing 14 parts. Each part is awarded upon completion of Professor Flake's ToonTasks after completing ToonTasks in Donald's Dreamland.

The entrance to Lawbot Headquarters.

The statue of the Chief Justice himself.

A Toon receiving messages from "The Two" as part of the Court Records puzzle.
Community content is available under CC-BY-SA unless otherwise noted.
Advertisement