Laff is a Toon's health points that are measured on a Laff Meter invented by Doctor Surlee. The Laff Meter resembles the head of the Toon's species and is shown at the bottom left corner of the interface. Toons start with 15 laff as they enter Toontown for the first time but can currently work their way up towards reaching a maximum amount of 137 laff (minus special perks). When a Toon's laff hits zero, they become sad and are sent back to the nearest playground with their gags taken away by the Cogs.

A single laff point refills on the Laff Meter every 30 seconds as the Toon idles in a playground or at their estate. Treasures can be collected for the Toon to refill their laff slightly faster once they gained at least one laff point.

There are a number of ways a Toon could gain more laff points besides completing certain ToonTasks. The following table shows all of the attainable laff boosts.

*The perk is temporary and lasts for a few days before the Silly Meter enters a cool down phase. 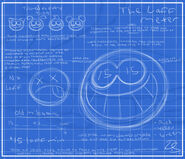 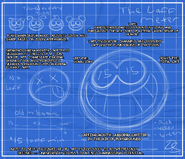 A decrypted version of the blueprint.

The message a Toon receives upon losing all of their laff.

A Toon's Laff Meter displayed above their head during the Chief Executive Officer boss battle.
Community content is available under CC-BY-SA unless otherwise noted.