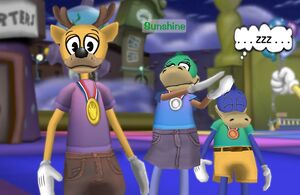 The Laff-o-lympics are a series of events where players must create a new Toon to work and build up towards a certain amount of laff for prizes at any of the three milestones: 50 laff, 100 laff, or 115 laff.

The first Laff-o-lympics event occurred on September 1, 2017 and ended on October 9, 2017. To celebrate the arrival of the new Toon species, players had to create a new deer or crocodile to participate. This event had the following milestones: 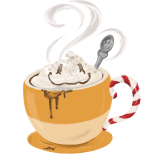 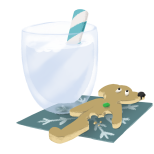 Unlike the previous event, the 2019 Laff-o-lympics underwent a new Winter theme. Toons were divided into two teams called "Team Hot Cocoa" and "Team Milk & Cookies". To join Team Hot Cocoa, players had to create a new cat, crocodile, deer, monkey, or mouse. To join Team Milk & Cookies, players had to create a new bear, dog, duck, rabbit, pig, or horse. This event had the following milestones:

In addition to the individual prizes, the team with the most total laff points received an additional 5,000 jellybeans, 1,000 racing tickets, one Gag-Up All unite, one Max Toon-Up unite, and two 600 jellybean unites. 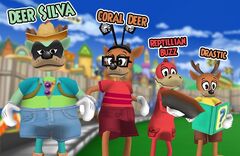 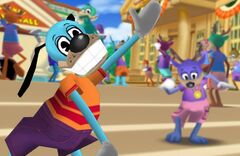 Flippy presents the deer and crocodile Toons of the 2017 Laff-o-lympics, dancing in the background. 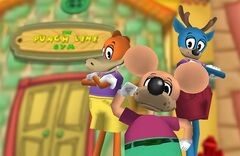 Franz Neckvein stands with previous winners of the Laff-o-lympics.
Add a photo to this gallery

Retrieved from "https://toontownrewritten.fandom.com/wiki/Laff-o-lympics?oldid=91705"
Community content is available under CC-BY-SA unless otherwise noted.