Jungle Vines is a Trolley game that can be played by one to four Toons.

The objective is to reach the rightmost vine within the time limit. Scattered across the jungle are bananas (that are needed for Holly Daze's task), which Toons can collect to earn points. There are bats flying across the course and spiders crawling on the vines. Coming into contact with the bats or spiders will result in falling and restarting from the last vine grabbed.

To move to the next vine, Toons should face the direction of the vine and press the arrow key: left to go left, right to go right. The lower the Toon is on the vine, the faster the Toon will swing away from the vine. There are a total of twenty vines to swing from.

A bar at the bottom shows a Toon's progression through the course. 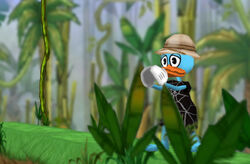 Retrieved from "https://toontownrewritten.fandom.com/wiki/Jungle_Vines?oldid=99725"
Community content is available under CC-BY-SA unless otherwise noted.