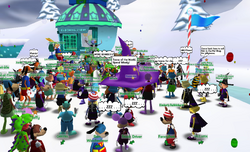 A jellybean fest, also known as a beanfest, is an event where a group of Toons get together and use unites to throw jellybeans among each other. Unites can be obtained by defeating the Chief Financial Officer at Cashbot Headquarters.

The most common place to find jellybean fests is usually on a full district in Donald's Dreamland. In some cases, jellybean fests may happen on Thwackville in Toontown Central.

A beanfest in Donald's Dreamland.

A beanfest in Goofy's Speedway.

A beanfest in Blam Canyon.
Add a photo to this gallery
Retrieved from "https://toontownrewritten.fandom.com/wiki/Jellybean_fest?oldid=103451"
Community content is available under CC-BY-SA unless otherwise noted.