Halloween is an event in which the curse of a Jack O' Kazam, a vengeful wizard that causes Toontown to transform into "Spooktown" and trigger all sorts of spooky scenery that is sure to give Toons a fright. This event occurs every year from October 25th to November 1st.

Toons receive a new cattlelog featuring all sorts of Halloween-themed items, including clothing, accessories, and furniture. Once the event is over, all these items will no longer become available in the cattlelog until the next event, but will still appear in the backorder.

Trick-or-Treating is a special activity where Toons say "Trick or Treat!" to six shopkeepers by using the respective SpeedChat phrase from the "Halloween" section. When visiting the last shopkeeper, the greedy Jack O' Kazam will unleash his Pumpkin Head curse.

Scattered across Toontown, Toons can locate one of Jack O' Kazam's spooky bean bags in any playground or building within the area. Only one bag is found in all districts, but a bag will spawn in a certain spot each time a bag is collected. When a Toon collects a bag, they receive a special unite that may consist of 1000 jellybeans or a surprise "curse".

On October 31st, Flippy offers a special treat for cats who cross his path by saying the SpeedChat phrase "Toontastic!" to him in the Toontorial. 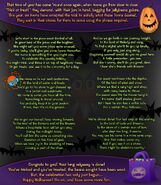 Jack O' Kazam introduces himself as the wizard who haunted Halloween.

Bloodsuckers invading a street from Toontown Central during a Mega-Invasion.

Sir Max holding a pumpkin and a spooky bean bag while surrounded by Toons.

Flippy with two Black Cats behind him at Tutorial Terrace.

Flippy surrounded by his pet, Fluffy, and a bunch of Black Cats.

Community Spotlight for Halloween of 2017.
Add a photo to this gallery

Retrieved from "https://toontownrewritten.fandom.com/wiki/Halloween?oldid=87051"
Community content is available under CC-BY-SA unless otherwise noted.