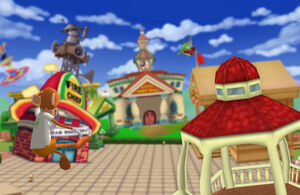 Gravitational anomalies are an effect on playgrounds and Toons where gravity disappears, which only happens on April Toons Week. During this time, certain buildings float up into the air at completely random times, then get thrown back down. Toons would begin to jump higher, allowing them to jump onto floating buildings whenever they are in need of a ToonTask completion.

A floating Toon Headquarters in The Brrrgh.

A floating Toon Headquarters in Daisy Gardens.
Add a photo to this gallery
Retrieved from "https://toontownrewritten.fandom.com/wiki/Gravitational_anomalies?oldid=100878"
Community content is available under CC-BY-SA unless otherwise noted.