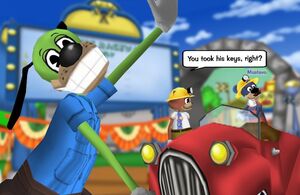 The Grand Prix is a weekly event that occurs all day on Mondays and for a couple hours on Silly Saturdays where Toons can enter a three course racing tournament at Goofy Speedway for massive amounts of tickets. On the day that Grand Prix is implemented, a special limited-time Grand Prix Week will be initiated. Entering the Grand Prix requires 500 to 1000 tickets.

“Oh, and about those leaderboards. You know, the one I crashed into a few years back? They're all fixed up! Toons can compete for the top racing time to get their name on the leaderboard.”
―Sir Max[src]

When Goofy Speedway opened on November 22, 2013, Sir Max at one point accidentally crashed his kart into the Grand Prix leaderboard that was created by Hawkheart. Although Toons could race ever since then, the leaderboard was simply left behind in a state of destruction with Sir Max's kart trapped within. On August 29, 2017, it was announced that the leaderboard was finally repaired to prepare for the release of Grand Prix. 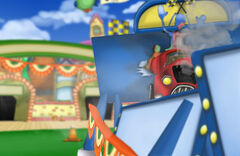 Sir Max's kart crashed into the Grand Prix leaderboard.
Add a photo to this gallery
Retrieved from "https://toontownrewritten.fandom.com/wiki/Grand_Prix?oldid=91655"
Community content is available under CC-BY-SA unless otherwise noted.