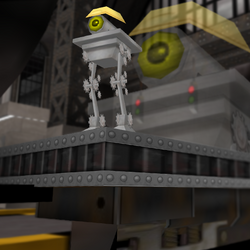 Goons are one-eyed, two-legged robotic guards that project a searchlight out of their eye to inflict damage toward Toons. They can be stunned by jumping on their helmets, though they recalibrate after several seconds. They commonly appear in the Cog facilities such as the Sellbot Factory, Cashbot Mints, and the District Attorney's Office; and also appear in the Cashbot Vault during the Chief Financial Officer boss battle.

There are several variants of goons. Most of them are exclusively seen in the Cashbot Vault.

"Once his helmet is gone, grab a disabled goon and hit him in the head!"
―Mata Hairy, during the Chief Financial Officer boss battle.