Start a Wiki
Goofy Speedway is a playground located west of Toontown Central. Here, you can purchase a kart and earn tickets and trophies by racing other Toons. 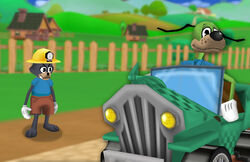 In order to race, a Toon has to purchase a kart. Also, you may buy accessories for your kart, such as new tires or paint. There are decorations in the Auto Shop, including trophies.

Tickets are the main currency of Goofy Speedway. Tickets, rather than jellybeans, are used to purchase accessories, new karts, and join battle races. Practice races are free, while battles can cost from Fifty to Four Hundred tickets.

Racing is a side activity in Toontown Rewritten located in Goofy's Speedway where up to 4 Toons can race in go karts on a variety of tracks to earn tickets, which can then be used to enter more races or upgrade their karts as well as add accessories. You can also earn trophies and eventually laff points from reaching certain milestones (such as 10 wins on a type of circuit, 100 races qualified). There are 3 types of racing events: Practice, Toon Battle & Grand Prix. Racing was implemented to the game in November 23, 2013.

There are 6 tracks currently availbable:

In a practice race, Toons take a practice run before they do a battle. Toons cannot collect boxes, so it is sometimes hard to win. However, there is no deposit and each Toon will recieve 20 tickets for qualifying.

In battle races, Toons race each other. Unlike practices, battles have payouts and deposits. The higher place you get, the more tickets you'll receive. On the track, there will be clear boxes. Upon collecting one, you will get a randomly chosen attack to use.

Each attack has a different purpose:

By racing consistently, you will receive trophies. For every ten trophies you collect, you'll get a laff boost. A total of three laff boosts can be obtained from racing.

Goofy Speedway opened on November 22, 2013.[1] It was the final neighborhood added. However, on the 22nd, they didn't have any racing permits, so no one could race. However, Toons were still able to purchase karts without being able to race.

The Speedway Circuits were released November 23, 2013.[2] After getting the permits, Toons were now able to race on the tracks.

On November 24, 2013, Rural Raceway courses were opened.[3] According to Shockley, this was where the estates were going to be built. Sir Max also gave us a complimentary bike horn and basket which he then took "back as a way to thank myself for the work we did for you".

In the final update to Racing on November 25, 2013,[4], City Circuits were opened. The streets were still mid-way through construction when the update went live, so there were some stray bricks and some buildings that were missing.

Goofy Speedway in under construction

Goofy Speedway tunnel
Add a photo to this gallery