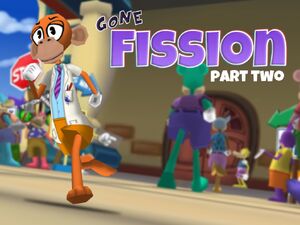 In this comic, Doctor Surlee runs off to search for Doctor Fissionton after realizing he had departed from Toon Hall.

The events of this comic take place on Wednesday, March 13, 2019, the day that the Silly Meter reached its peak for the first time.

Retrieved from "https://toontownrewritten.fandom.com/wiki/Gone_Fission:_Part_Two?oldid=100807"
Community content is available under CC-BY-SA unless otherwise noted.