The Gold Rod is the most expensive fishing rod that can be purchased from Clarabelle's Cattlelog for 2,000 jellybeans. It appears in the next four Cattlelog issues after purchasing the Steel Rod, but the earliest Cattlelog issue it can appear in is Series 2, #3. It requires five jellybeans per cast, and is capable of catching all 70 fish species and varieties. 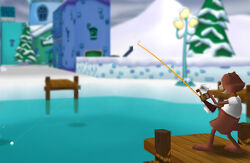 Hawkheart using the Gold Rod while fishing at The Brrrgh.

A Toon receiving the Gold Rod in their mailbox.
Add a photo to this gallery
Retrieved from "https://toontownrewritten.fandom.com/wiki/Gold_Rod?oldid=106584"
Community content is available under CC-BY-SA unless otherwise noted.