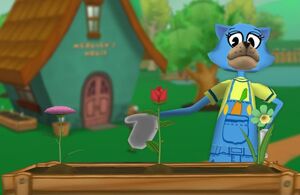 Gardening is an activity where Toons can start and grow their own garden at their estate with the gardening kit that they purchase from Clarabelle's Cattlelog. ​Once the Toon receives their gardening kit, a guide will be shown, then tree plots and gardening trays appear around the Toon's house. Gardening involves three main activities: growing flowers, growing trees, and erecting decorative sculptures.

Shovels and watering cans are the primary gardening tools, and they improve with use.

There are currently four different watering cans Toons can use to garden. To earn another watering can, Toons must water trees and flowers a specific amount of times, whether on their own estate or elsewhere. After each watering can advancement, water points are reset for the next watering can level. Each consecutive watering can has a higher amount of points to complete.

Toons have the opportunity to use four different shovels to garden, each of which has two levels and earns shovel points. To gain shovel points, a Toon must plant and pick fully grown flowers of the highest level of jellybean combinations their shovel permits. To earn the next level or the next shovel, Toons must continue to plant, pick, and replant their maximum-level flowers a specific number of times. Doing so will earn one point per flower when picked, and a "+1 Shovel Skill" notice will appear.

Each shovel type has two levels and requires increasingly more points to achieve. Shovel points for each type (Tin, Bronze, Silver, Gold) begin at zero to count toward the next shovel type. Once the shovel level advances, flowers from the prior smaller jellybean combinations may still be planted, but those will not earn shovel points. Refer to the following table for further information.

Shovel types and levels are important primarily for the advancement of the Toon's flower collection, since a gardening trophy (and a laff point) is earned for each set of ten new flower types in the Shticker Book. The shovel type does not affect the gardening of gag trees, but maximizing the shovel's skill level does enable the Toon to access certain decorative sculptures and statues.

Even after harvesting all types of flowers and earning the fourth gardening laff point, the Gold shovel will not yet be fully maximized. Toons must continue to plant and harvest eight-jellybean flowers until their Gold shovel skill reaches its limit.

There are eight different main categories of flowers that a Toon may plant. These include Daffodils, Lilies, Daisies, Pansies, Carnations, Roses, Tulips, and Petunias. Each flower category has at least two varieties of species, for a total of 40 different flowers.

A Toon can plant a flower outside their house in various pots or window boxes, with up to ten flower planting spots available at a time. Using the "Plant" function will prompt a jellybean generator to appear. In order to plant a flower, a certain combination and order of jellybeans must be selected.

Below are the jellybean combinations for each type of flower. Jellybeans for the flowers use eight different colors: red (r), green (g), orange (o), violet (v), blue (b), pink (p), yellow (y), and cyan (c).

Clarabelle's Cattlelog offers garden supplies that can be planted as statues or sculptures in a specified area of the Toon's garden. The statues resemble certain Disney characters (four types) or a Toon (four poses), or three miscellaneous sculptures. Some statues cannot be planted before the Toon reaches a certain requirement.

A Toon can plant a statue outside their house in the small gray podium after purchasing the statue from Clarabelle's Cattlelog. Using the "Plant" function will prompt a jellybean generator to appear. In order to plant a statue, a certain number of jellybeans must be selected.

Below are the required jellybeans for each type of statue. Six different jellybean colors are used for statues: red (r), green (g), orange (o), violet (v), blue (b), and silver (s). The silver color is used only for certain statues or sculptures, and not for planting flowers.

Gag trees can grow gags. Once planted, watered, and fully grown, the tree will boost the power of that gag in battle. This is called an "organic bonus". Once per day, the Toon may also pick gags from the tree to place in their gag pouch. Toons can plant a gag tree on any of eight available spots around their estate, by choosing the gag from their inventory. However, in order to plant any level two+ gag, the preceding gag in that track first must be planted. For example, the Feather, Megaphone, and Lipstick must be planted before the Bamboo Cane can be planted. If a lower level gag tree is removed, higher level trees will be unable to produce gags or organic bonuses.

Under normal circumstances, a tree takes a total of three days to grow per level of the gag. This means that a level 7 gag tree takes three weeks to grow.

As with flowers, the time required to grow a gag tree can be shortened during special events when gardening is accelerated. Gag tree blooming is also accelerated, so gags can be picked more than once per day during the event.

The organic bonus increases damage for offensive gags, increases healing for Toon-Up gags, and increases accuracy for Lure gags, for any gags the Toon has planted and grown to maturity. The bonus actually becomes active the day before a tree is fully grown (for example, 11 days after planting a gag tree with a level four gag). Gags with the organic bonus active are known as "organic gags".

When a Toon plants Trap gag trees, the damage dealt by their Trap gags is increased, as shown in the table below.

When a Toon plants Lure gag trees, it increases the base accuracy of each Lure gag by 10%. The increased accuracy values are as shown in the table below.

*When used in battle, the accuracy gets capped at 95%.

When a Toon plants Sound gag trees, the damage dealt by their Sound gags is increased, as shown in the table below.

When a Toon plants Throw gag trees, the damage dealt by their Throw gags is increased, as shown in the table below.

When a Toon plants Squirt gag trees, the damage dealt by their Squirt gags is increased, as shown in the table below.

When a Toon plants Drop gag trees, the damage dealt by their Drop gags is increased, as shown in the table below.

Flowers and gag trees grow at 12:00 AM Pacific Time on a daily basis for any gardening activity that was done before said time. For instance, if a flower or gag tree is planted and watered at 11:59 PM, it will grow at 12:00 AM. Under normal circumstances, if it is planted at 11:59 PM, but watered at 12:00 AM, it will not grow until 12:00 AM the following day. However, if the Toon is at their estate while the clock rolls over to 12:00 AM, the game will not update their garden until they leave, making any gardening done during this time count for the previous day; for example, if the Toon arrives at their estate at 11:59 PM and waits until 12:03 AM to garden, their plants will grow once they leave their estate.

The wheelbarrow where Toons sell their flowers in.

A set of flowers at a Toon's house.

A Toon gaining the huge watering can.

A page in the Shticker Book showing the gardening trophies.
Add a photo to this gallery

Retrieved from "https://toontownrewritten.fandom.com/wiki/Gardening?oldid=116870"
Community content is available under CC-BY-SA unless otherwise noted.