Flunky is the first and lowest Cog on the corporate ladder of the Bossbots. They range from level 1 to level 5.

When a Flunky rejects the Toon from entering a battle, they say the following:

Below are Stock Options required to obtain every promotion for each Flunky level of the Bossbot Cog Disguise.

A "flunky" is an assistant who does menial work; in other terms, a lackey. 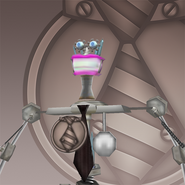 A Flunky roaming in Toontown Central during Doomsday.

The Flunky that appears after the Chief Executive Officer is defeated.

Flunky as he appears in a Robust magazine for being certified top-dog Cog.