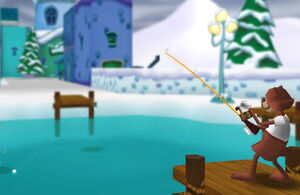 Fishing is an activity where Toons catch fish to add to their collection and gain jellybeans by selling the fish to a fisherman. As a Toon catches fish, they earn trophies and additional laff points. Up to 70 different fish species can be caught.

In addition to fish, objects such as old boots and jellybean jars can also be caught. Catching an old boot does not grant jellybeans but can be used for filling any square on a bingo card during Fish Bingo. Jellybean jars instantly reward Toons with a certain number of jellybeans, depending on the fishing rod being used.

Fish are indicated by circular shadows in the water. The shadow always appears in the same size and shape, therefore it does not determine the exact type of fish.

A pond is an area where Toons are able to fish. Ponds are located in every playground (excluding Goofy Speedway) and their streets, including the estate. To begin fishing, a Toon can simply walk up to an unused dock. The cast button must be held down, pulled back, and released to aim at a shadow; a successful cast leads to a fish or object being caught. A maximum of 20 fish can be held in the bucket at once, then the fish must be sold to a fisherman before a Toon is able to fish again. The fish that Toons sell to a fisherman are then sold to the Pet Shops. If a Toon receives more jellybeans in payment than they can carry, extra jellybeans overflow into their jellybean bank at their estate. This mechanic can be used as a quick way to make jellybeans. By simply catching and selling fish, there is no need for Toons to repeatedly deposit jellybeans in their jellybean bank.

Toons always start with the lowest tier rod, the Twig Rod. Several upgrades can be purchased from Clarabelle's Cattlelog; a new rod becomes available per four Cattlelogs. The highest tier rod is essential to catch new fish species which could not be caught using the previous rod, but costs an additional jellybean for each cast. There is no other disadvantage to an upgraded rod because it can also catch smaller fish.

The following rods are available, ordered from lowest to highest tier.

The following tables were devised to give Toons an idea on where they can catch each fish of every species. From 1 to 10, a lower number refers to a less rare fish and a higher number refers to a fish that is more rare. It recommended that Toons go fishing when the "Decreased Fish Rarity" Silly Team is active for an increased chance of catching certain fish.

Fish Bingo is a fishing event that occurs all day on Wednesdays and for a few hours on Silly Saturdays. From Classic Bingo to Blockout Bingo, Toons can partake in playing various Bingo modes to earn extra jellybeans.

On the bottom right corner of their screen where a Bingo card is shown, a Toon can click a matching square to mark a specific type of fish when caught, and work to earn jellybean prizes.

For every 10 new fish species a Toon catches, they earn a fishing trophy and a laff boost. There are seven trophies in total for 70 fish. This accumulates to a total of seven laff boosts from all seven trophies earned.

All trophies go up in tier from bronze to silver to gold:

By catching 70 fish and therefore earning the above trophies to max fishing, the Profishional Angler Outfit is awarded to Toons.

A Toon earning a laff boost at their estate.

A Toon selling 20 fish to a fisherman.