“I plan to do some double dipping!”
―Double Talker

The Double Talker is the third Cog on the Lawbot corporate ladder. Their levels range from three to seven.

A Double Talker is a person who says one thing, but means another, in order to manipulate others.

A Double Talker being hypnotized by a lure gag

A level 6 Double Talker during Doomsday 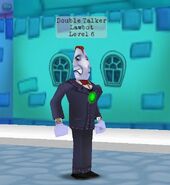 A Double Talker in battle
Add a photo to this gallery
Retrieved from "https://toontownrewritten.fandom.com/wiki/Double_Talker?oldid=100697"
Community content is available under CC-BY-SA unless otherwise noted.