Doomsday (also known as the second part to the Toon Council Presidential Elections) was a live event that took place on April 19th, 2014. During the event, Flippy and Slappy were in competition with one-another to become the official president of the Toon Council. The Cogs then proceeded to ambush the entire Toontown Central playground, just after Slappy was announced as the new president. A level 3 Yesman came and made Slappy sad, which then started the battle between Toons and the Cogs. Toons would fight these Cogs by throwing pies at them and avoiding contact with them. Gradually, stronger waves of Cogs would arrive, all up until the level 50 skelecog, Director of Ambush Marketing, was defeated by Flippy, as well as the rest of the Toons. After the battle was over, it seemed as though the Cogs were defeated, but the Toons had only managed to push them back to the streets. 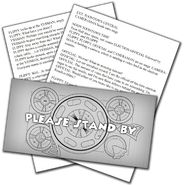 Add a photo to this gallery
Retrieved from "https://toontownrewritten.fandom.com/wiki/Doomsday?oldid=42376"
Community content is available under CC-BY-SA unless otherwise noted.