Doodles are pets for Toons. They are similarly shaped to jellybeans and have eyes, a nose, ears, and feet, along with an array of possible unique features such as fur patterns, tails, horns, and antennae. On April 10, 2017, Fluffy returned to Flippy with thousands of other doodles, allowing them to be adopted by Toons.[1]

Different doodles with a different variety of traits can be adopted from certain Pet Shops. During adoption, Toons can choose a doodle and give them a pre-generated name. The options for every Pet Shop's doodles change each day at every playground; however, some doodles may remain available in a Pet Shop for multiple days.

A doodle is sent to their owner's estate after adoption. The doodle appears on their owner's friend list so they can check on their doodle at any given moment. If a Toon is not satisfied with the doodle they adopted, they can speak to a Pet Shop clerk to return the doodle.

When adopting a doodle, a list of specific traits appear on the respective doodle. Traits determine how a doodle may behave. To find doodles with good or best traits, visit the Pet Shop from The Brrrgh or Donald's Dreamland.

The following traits are considered worse.

The following traits are considered bad.

The following traits are considered good.

The following traits are considered best. 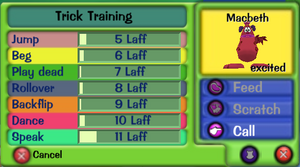 Toons can care for their doodles by clicking their names to open a panel that provide a few options for them to be called, scratched, or fed.

A doodle's trick meter is also shown on the panel, showing how many laff points are offered by each and every trick if performed successfully. Training a trick boosts how much laff a trick can restore and reduces the chance of a doodle getting confused. Depending on where a Toon adopts a doodle, they have different traits that determine their overall behavior (see "Traits"). 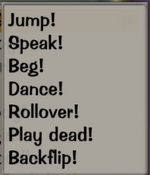 Jump is the very first doodle trick that every Toon obtains by default. This is the most basic trick that a doodle can learn, capable of restoring up to 10 laff when fully trained, and 5 laff with minimal training. To teach a doodle a trick, or practice a trick, use the SpeedChat phrase "Here girl!" or "Here boy!" from the "Pets" section, or select the "Call" button from the doodle panel. Once the doodle approaches a Toon, a desired trick phrase can then be selected by that Toon.

After a Toon selects the desired trick phrase, their doodle then either performs the trick successfully or unsuccessfully. If the trick is successfully performed, the doodle heals any Toons in close proximity and gains points in their trick meter on the doodle panel. As the trick meter increases, the laff the trick restores also increases until it reaches its maximum value. Doodles can become tired after performing tricks and need rest. To help the doodle feel happy, a Toon can feed them jellybeans and say positive phrases to them, such as "Good boy!" or "Good girl!".

Toons can purchase other tricks from Clarabelle's Cattlelog for up to 600 jellybeans each. A Toon can purchase each of the following trick phrases with the exception of Jump.

Each trick starts at 0 skill points and has the standard maximum skill points of 10,000; each trick gives 5 skill points. This means Toons need to have their doodle perform 2,000 successful tricks before maximum accuracy and laff for those tricks can be reached.

Although Toons can train doodles during Cog battles, a faster method is to simply train them at an estate. Each time a trick is being trained, the accuracy and a doodle's stamina with that trick increase. In other words, a fully trained doodle may easily perform five to ten tricks without getting tired, whereas an untrained doodle may be exhausted after performing one trick.

As mentioned above, there are many ways to have a doodle return to a positive state after being in a negative state (i.e. tired to excited). The fastest way, when training, is to say a trick phrase repeatedly. Repeating a phrase as much as possible is very time consuming but remains the simplest way of training a doodle. It is also recommended that Toons train their doodles when the Doodle Trick Boost Silly Team is active for frequent performance of tricks and earning more skill points.

Doodles can experience a variety of moods that affect their overall behavior. Different traits can influence how often certain moods occur. For example, a doodle that has a trait of being often tired would become tired frequently after performing single tricks, while a rarely tired doodle almost never tires out after performing tricks. Each mood can affect how a doodle performs. Moods are identified by symbols that appear above a doodle's head.

Each trick has its own base accuracy. When training each trick, the accuracy slowly increases, allowing a doodle to become better at performing the trick. A doodle eventually reaches the maximum accuracy for each trick, which is when they are considered "maxed". Accuracy is a calculation that relies on a doodle's state, what trick a Toon is using, and a doodle's skill points with said trick.

The following tables show the accuracy for each trick at each level of training. A positive mood is when a doodle feels neutral, affectionate, or excited. A negative mood is when a doodle feels tired, hungry, bored, or angry. The accuracies listed are the probability percentages that a doodle successfully performs the tricks. Every time a successful trick is performed, its accuracy increases, so therefore the percentages listed are at a range.

Like SOS Toons, doodles can be called by Toons may call for assistance in Cog battles. A Toon selects a trick to call their doodle and the doodle attempts to perform the trick after teleporting. If the trick fails, the doodle feels sad and has a question mark symbol above their head, leaving their owner disappointed. If the trick successfully works, laff is granted to all Toons in battle. The doodle also gains training points when a trick is successfully performed in battle. The doodle teleports back to their owner's estate after attempting to perform a trick.

Flippy and Fluffy with many other doodles on the day of their arrival.

A Toon with her excited doodle.

A player's account with one doodle for six of their Toons.