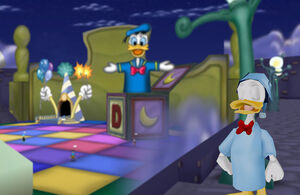 Donald Duck is a cartoon character created in 1934, at Walt Disney Productions. Donald is an anthropomorphic white duck with a yellow-orange bill, legs, and feet. He typically wears a sailor shirt and cap with a black or red bow tie. Present in Toontown Online, he piloted the boat at Donald's Dock, and also wore a blue robe and a night cap while roaming around his second playground, Donald's Dreamland.

Like any other Disney characters, Donald does not appear anywhere in Toontown Rewritten. However, he was referenced in one blog post where Sir Max talks about how the Toon Council held a meeting to vote on the owner of the last playground. After an hour of ranting from Donald, they finally voted to give him a second playground, just as long as he uses it for sleeping.

Retrieved from "https://toontownrewritten.fandom.com/wiki/Donald_Duck?oldid=70365"
Community content is available under CC-BY-SA unless otherwise noted.