"The fact of the matter is, Toontown Rewritten's story has been planned out from beginning to end. It's what inspired the name "Rewritten"! Have you ever heard of a monkey named Doctor Surlee, or the significance of his pocket-watch in our logo?"
―Joey[src]

The state from which Doctor Fissionton found the pocketwatch was unstable and ripped him away from time due to malfunction, resulting in him being split into two and become an alternate form of a red cat.[1] The pocketwatch unveiled an anomaly caused by Doctor Surlee's time travel, that is the 26th.

While working away at blueprints for a redesigned Silly Meter, Doctor Surlee discovered that the pocketwatch had caused the Fissiontons to flicker for the first time.[2] The flickering continued to happen periodically for months to come, and by the time "The Final Plan" was near completion, the Fissiontons found themselves struggling to stay anchored to the timeline. 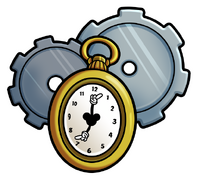 The old design of the pocketwatch from Open Beta.

The current design of the pocketwatch.

The pocketwatch on the back of Doctor Surlee's trading card.
Add a photo to this gallery

Retrieved from "https://toontownrewritten.fandom.com/wiki/Doctor_Surlee%27s_pocketwatch?oldid=92298"
Community content is available under CC-BY-SA unless otherwise noted.