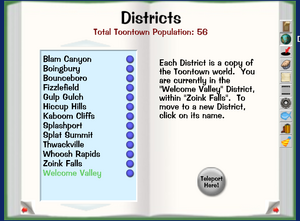 Districts are each an identical copy of Toontown. There are, however, minor differences which vary depending on the district; these differences include the number of Toons, Cog Buildings, and Cog Invasions.

Clicking on a district name will provide the number of Toons in that district, and if a Cog Invasion is currently ongoing.

These are the current districts remaining.

Welcome Valley is a district that new Toons enter when arriving to Toontown for the first time upon leaving the Toontorial. It is a Super Safe district, and Cog Buildings and Invasions will not occur ontop of the normal protection. As Toontown's sub-district, there is more than one Welcome Valley. If a Toon leaves Toontown Central while in a Welcome Valley, they will be teleported out of Welcome Valley.

These districts only allow the use of SpeedChat. A SpeedChat icon is displayed next to their names indicating as such.

These districts are safe from summoned Cog Invasions, Mega-Invasions, and certain events like the Grand Prix. A message is displayed above the "Teleport Here!" button to indicate what the district is safe from.

These districts were introduced to the game from time to time but have all been removed or renamed.

A Legal Eagle invasion happening in the Renaissance River district.

The districts page during the alpha stage

A warning being received when a district is full.

The revamped Districts page
Add a photo to this gallery

Retrieved from "https://toontownrewritten.fandom.com/wiki/Districts?oldid=103068"
Community content is available under CC-BY-SA unless otherwise noted.