Crocodile is a new Toon species that ran as one of the two successful candidates in the Toontown Species Election.

When a crocodile speaks, they rarr. If a crocodile uses a word that is not included in the whitelist for SpeedChat+, the word will be censored by "rarr", "rraw", or "chomp".

Large crocodile head with large muzzle.
Add a photo to this gallery

Notable crocodiles include Cassie Peppercakes, who is currently the only crocodile NPC in Toontown Rewritten. 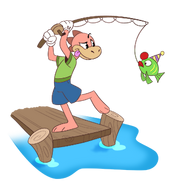 Final artwork of the crocodile.

Antlers are tempting to touch.

A crocodile holding a Clown Fish.

Bye, Bye, Beta!
Add a photo to this gallery
Retrieved from "https://toontownrewritten.fandom.com/wiki/Crocodile?oldid=103203"
Community content is available under CC-BY-SA unless otherwise noted.