In Toontown Online, he was "the Toon who decides how much stuff costs in Toontown". He only appeared in a few Gags n' Gears blog posts (mainly in the background) and was heavily related to Toon parties. It's unknown if he ever made an in-game appearance or if his clothes could be found in the phase files.

In Toontown Rewritten, Crazy Neddieslam (the tall male orange monkey with smile, dark brown shorts, and a blue polka dot shirt with a red polka dot bowtie) has appeared in blog post pictures, but hasn't been given a speaking part yet. His name hasn't even been officially mentioned on ToontownRewritten.com yet. 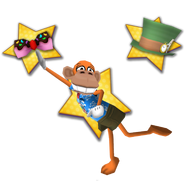 Retrieved from "https://toontownrewritten.fandom.com/wiki/Crazy_Neddieslam?oldid=79577"
Community content is available under CC-BY-SA unless otherwise noted.