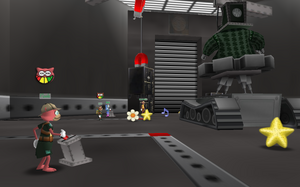 Cranes are tools used in the Chief Financial Officer boss battle where up to four Toons may step onto a podium in order to operate a crane. They are used to throw goons or safes at the C.F.O. to deal a certain amount of damage. Toons can throw goons at the C.F.O. at any given moment; however, throwing a safe is only needed when the C.F.O. has been stunned by a goon, or when the C.F.O. is using his Safety Helmet, which throwing another safe will remove the safe off of the C.F.O.'s head. To stop operating a crane, simply click the "Leave Crane" button on the bottom right corner or press the "ESC" key.

Cranes require a certain skill to use, one that is developed over time. In a Toon's first few C.F.O. runs, it is generally not a good idea to immediately grab a crane, especially if there are Toons with a Money Bags, Loan Shark, or Robber Baron disguise in the respective boarding group. This is because the boarding group is likely to have a few Toons who are highly experienced at handling the cranes. When the time is right, below are some important pointers to remember. Old Toontown veteran players who are returning after an extended break may want to review this section in order to refresh themselves with how to use the cranes.

Remember that the Toon is vulnerable to attack from both the C.F.O. himself and the goons while operating a crane.

Retrieved from "https://toontownrewritten.fandom.com/wiki/Cranes?oldid=93521"
Community content is available under CC-BY-SA unless otherwise noted.