"It was all slapstick and seltzer in Toontown until robot businessmen invaded the town to create their own corporations and put an end to all fun. Luckily -- they can't take a joke!"
―Toontown Rewritten

Cogs are the main antagonists of Toontown Rewritten. They are evil business robots with the objective to convert Toontown into a corporate dystopia. Their corporate ladders comprise of eight Cogs each, with a total of 32 different Cogs normally varying from level 1 to level 12, as well as a boss Cog from each ladder. Cogs use a set of attacks to sadden the wacky, cheerful Toons into losing all their laff points; stronger Cogs tend to have higher health and stronger attacks. However, Cogs cannot take a joke, and therefore they explode when they laugh upon being affected by Toons' arsenal of gags.

The Cogs were first referred to as "Trolley-bots" that would appear in various Trolley minigames to provide friendly competition against participating Toons. On April 19, 2014, the Cogs invaded Toontown for the first time when they made an unexpected interruption during the Toon Council Presidential Elections by unleashing an invasion known as Doomsday to exercise ambush marketing. Sometime after the conclusion of Doomsday, the Cogs now roam the streets of Toontown to take over Toon Buildings by dropping Cog Buildings onto them, and to establish their own Cog headquarters that would be connected to some streets. Ever since then, Toons continue to fight against the Cogs in order to protect Toontown from their latest schemes. 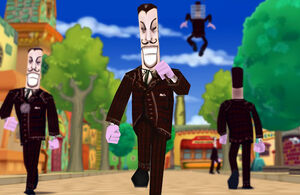 An invasion happens when a specific type of Cog from any of the four corporate ladders take over a certain district. They can happen at any time in any district. During this time, no other Cog, except the invading Cog, are roaming the streets and Cog Buildings. Skill points are doubled for gags during Cog Invasions.

In some cases, the Cogs launch full-scale Mega-Invasions that arrive in three-hour waves. 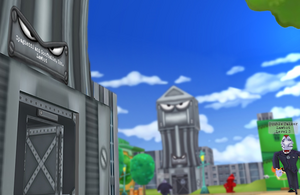 The Cogs have their very own set of skyscrapers that are constantly being dropped onto Toon Buildings. Toons can revert a Cog Building back into a Toon Building by defeating all the Cogs inside the building. If a group of Toons successfully defeat the Cog Building, their names and faces are shown as portraits on the wall inside the building. Toons may earn a specific type of star above their name tag should they successfully defeat enough Cog Building floors. 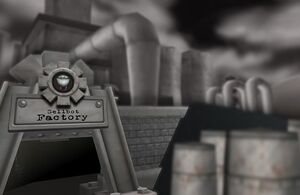 The four branches of Cogs each have their own respective headquarters. Thanks to Lord Lowden Clear along with assistance from members of the Toon Resistance and many Toons across Toontown, the following locations of every Cog headquarters were pinpointed:

An illustration of Telemarketer getting pied to the face.

An illustration of Short Change being crushed by a Big Weight.

A preview of three Cogs shown by Tutorial Tom during the Toontorial.
Community content is available under CC-BY-SA unless otherwise noted.
Advertisement