The Back Nine has nine floors, containing 72 Cogs in total and 18 Cog battles. The Back Nine awards 5120 Stock Options, which helps with earning promotions on high-level Bossbot Cog Disguises.

Three of the following Cogs can appear in the Cog Golf Courses. They can also be a Version 2.0 Cog.

The Cog Golf Courses are the preferred option by most Toons to collect Stock Options in order to fight the Chief Executive Officer, subsequently promoting their Bossbot Cog Disguise. Each of the three courses offer a different amount of Stock Options in total.

Hit all the red moles before time runs out. Beware of the tan moles, however, as they can launch a Toon in the air if they step on them. If time runs out, it resets and Toons lose 20 laff.

Race through the hedge mazes for a laff bonus. The first Toon to complete the maze receives a full Toon-up, and all other Toons receive 20 laff, if they reach the end. If time runs out before a Toon could make their way out, that Toon loses 20 laff and they automatically teleport to the end. Toons can see what direction to go based on the textures of the hedges. If there are vines, Toons should go left. If there are lack of vines, Toons should go right. There are also colored flags that hint how far a Toon is from the end of the maze.

It should be noted that there is one maze that defines the vine logic. A Toon should walk past one set of bushes and come to another set that has vines. From there, turn right instead of left. Walk through a strange zig-zag and then take another right.

At the end of a course, Toons battle the Club President along with three other Cogs, two of which are an ordinary level 11 and one is a Version 2.0 level 11. Defeating the Club President and the three Cogs award Toons with gag experience and Stock Options.

Like the District Attorney's Office and Cog Buildings, there are gag experience multipliers in the Cog Golf Courses battles. Unlike the offices, however, Toons gain a higher multiplier if they chose a harder course, regardless of what floor Toons are on. These multipliers are essential for quickly leveling up gags or, if a Toon's gag track is maxed, earning back a level 7 gag. 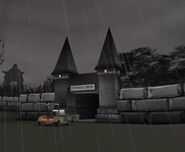 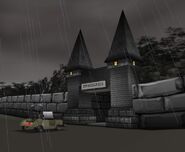 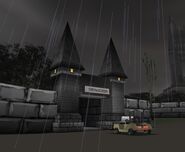 The Back Nine entrance.

A map of the mazes created by the Toontown community.
Community content is available under CC-BY-SA unless otherwise noted.
Advertisement