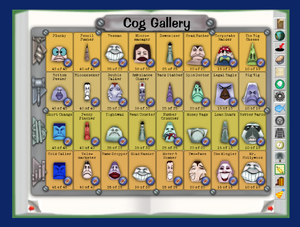 The Cog Gallery is a page in the Shticker Book that contains a list of all of the Cogs found in Toontown. They are organized into their respective Cog type: Bossbot, Lawbot, Cashbot, and Sellbot, from top to bottom. Each of these rows is listed from lowest rank to highest rank Cog, left to right.

Adding to the gallery

If a Toon fights a Cog that they have not seen in the past, and they are unsuccessful, that Cog will appear in their Cog Gallery with 0 defeated. When a Toon defeats all of the Cogs of a certain type, they may still defeat that Cog type, but the counter will no longer keep track of each defeat.

There are currently two limits to the defeat counter that the Cog Gallery counts to, for each Cog. When the first limit is hit on all Cogs of a certain type, the Toon will be able to see the amount of cogs (from that specific type) present in the area. This happens when the Toon clicks the Cog type symbol, at the leftmost side of the row of Cogs. Afterwards, the limit is extended above the initial number, and a Toon must defeat more of that Cog.

When the second limit is hit of each Cog of a specific type, the Cog type logo button shows more information in addition to amount of cogs present. Specifically, it will show the amount of buildings (of the specific Cog type) that are present in the area that the Toon is currently in. The buildings will also appear on the map, as the Cog type logo will appear on the building's place.

The following table shows each Cog rank, and its respective first and second defeat counter limits.

When Toons have defeated the Chief Justice, they will receive a Cog Summon. These summons appear on the Cog Gallery page, indicated by an evidence inside a blue button. Clicking on the button reveals an interface showing three different types of summons: Summon a Cog, Summon a Cog Building, and Summon a Cog Invasion.

Retrieved from "https://toontownrewritten.fandom.com/wiki/Cog_Gallery?oldid=91948"
Community content is available under CC-BY-SA unless otherwise noted.