Cog Buildings are buildings owned by Cogs that fall down from the sky when a Cog walks into a Toon building. These Cog Buildings can be up to 5 stories tall depending on the Cog that walks into it and the playground. For example, a level one Flunky in Toontown Central would most likely spawn a one floor building, and a level 12 Big Wig in Donald's Dreamland would most likely spawn a level five building. They also often serve as offices for the building-only Cogs, which as the title implies, only appear in Cog Buildings. Toons can take these Cog Buildings down in order to progress with their ToonTasks or to get points on the Toon Platoon. Should a Toon defeat all the Cogs in the building, the building will be taken down and the Toon building that used to be in it's place will reappear. The only thing that can be done inside Cog Buildings is battling Cogs working inside.

Stories of a Cog Building

The stories of a Cog Building also vary in difficulty. In a five-story Cog Building, the first floor is the easiest, the second floor is a bit harder, the third floor is a bit harder than the second floor, the fourth floor is a bit harder than the third floor, while the fifth floor is the hardest. The different stories also vary in appearance, the first story being a basement-like room with a clock, two trough four are platforms from which one can see dozens of Cogs behind their desks working or sleeping, and the top floor is the office of a Cog Building boss, a Cog which's level is overall higher than normal for Cogs in the said neighborhood. This Cog is always the one that starts the battle, with the battle starting phrase "I'm the boss." 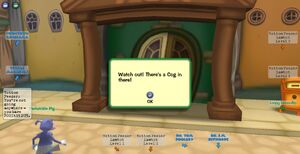 A Cog Building forms when a Cog randomly enters a Toon Building, the building can not be accessed until the Cog Building has fallen. Attempting to enter the building whilst it is being taken over will bring up the message "Watch out! There's a Cog in there!

The number of stories a Cog Building has depends on the Cog level and the playground. There is a low chance of a Cog Building forming in Toontown Central because of the low Cog level range, and it is impossible for four or more story buildings to form, unless a high level invasion is taking place.

Cog Buildings turn back into Toon Buildings once they has been defeated, however evidence suggests Cog Buildings take over themselves if they have been standing for too long, however this is yet to be verified.

Up to four Toons can fit into a elevator to go into a Cog Building. On each floor, after you defeat the Cogs, you have 90 seconds to get to the open elevator and move on the the next floor. If you not do not go in the elevator in time, you will be teleported out while everyone else goes onto the next floor. After beating all floors, the Toons are shown exiting the elevator outside the building and seeing the Cog Building turn back into a Toon building.

After a toon defeats a certain amount of cog buildings they will get a star above their name tag. Here are the stars going in order:

If a toon doesnt defeat a cog building for a long time, or if cogs take over their buildings that they rescued, they will lose the star if they have bronze and they will get downgraded if it is a higher star.

A Cog Building without a door.

Defeating a Cog inside the Cog Building.

Mover & Shaker about to create a Cog Building.

A Cog Building about to squash a Toon building.

A new Cog Building landing .
Add a photo to this gallery
Retrieved from "https://toontownrewritten.fandom.com/wiki/Cog_Building?oldid=22523"
Community content is available under CC-BY-SA unless otherwise noted.