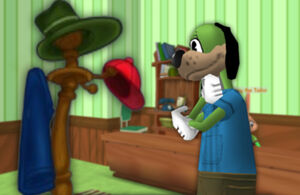 Clothing is worn by Toons that include shirts, shorts, skirts, and accessories. Once the player begins the Create-A-Toon process, the Toon is already wearing randomized clothes by default, but can change the clothes in the third phase of the process. When a Toon has obtained clothing, they can interact with their wardrobe to change their shirt and shorts, and interact with their accessory trunk to change accessories.

Shirts, shorts, skirts, and accessories can be found in Clarabelle's Cattlelog, through special events, from clothing shops, or redeem codes given out by the Toon Council. Obtaining clothes from clothing stores in each playground requires a clothing ticket, which Toons can get by completing a ToonTask given by an HQ Officer or buy clothing for 200 jellybeans from clothing shops.

Outfits can be made of a combination of shirts, shorts, skirts, and accessories. For example, an outfit called "The Potionist" composes of a shirt, a skirt, and a hat that female Toons can wear to dress up as a witch, but male Toons can only wear the hat. There are many items made to be worn in an outfit, though Toons can still mix and match, wearing what they enjoy.

There are seven types of clothing, but only two of them, shirts and shorts, are mandatory to wear. All four accessories are optional to wear. 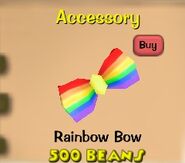 An example of an accessory: a hat/bow.

A wardrobe, where shirts and shorts/skirts are stored.

Retrieved from "https://toontownrewritten.fandom.com/wiki/Clothing?oldid=104663"
Community content is available under CC-BY-SA unless otherwise noted.