Clip on Tie is a Cog attack that is used by Telemarketers, Short Changes, and Flunkies. This is one of the three Cog attacks that uses a tie, the other two being Power Tie and Half Windsor, which are both more powerful than this attack.

A clip on tie is a tie for people who do not know how to tie a tie. As the name implies, people clip the tie on their shirt. 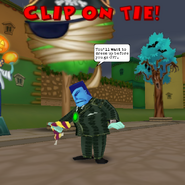 Short Change using Clip on Tie attack
Add a photo to this gallery
Retrieved from "https://toontownrewritten.fandom.com/wiki/Clip_on_Tie?oldid=99773"
Community content is available under CC-BY-SA unless otherwise noted.