"That's right, folks. Barren houses are no longer, because Clarabelle Cow has moved into town and set up her very own phone-in furniture service! She's got everything from knick-knacks to paddy-whacks, and you could even give your favorite dog (Myself, of course.) a bone!"
―Sir Max[src] 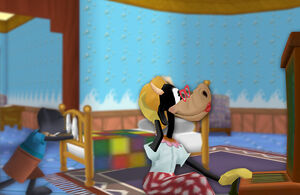 Clarabelle Cow is a cartoon character created by Walt Disney in 1923. Within the fictional world of Toontown, she is an NPC who is responsible for running her very own Cattlelog. From her Cattlelog, Toons can purchase all sorts of various items, including clothing, accessories, furniture, SpeedChat phrases, and more.

Unlike other Disney characters (with the exception of Minnie Mouse from "Match Minnie"), she appears in Toontown Rewritten and is referenced in many blog posts. 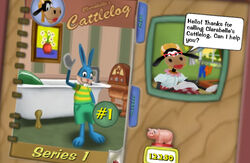 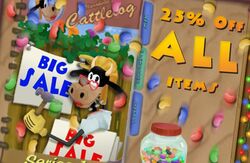 Retrieved from "https://toontownrewritten.fandom.com/wiki/Clarabelle_Cow?oldid=110181"
Community content is available under CC-BY-SA unless otherwise noted.