The Cashbot Mints are a facility located in Cashbot Headquarters with elevators to each mint situated throughout the courtyard and is where Cashbots store large quantities of their money. Toons often infiltrate the Cashbot Mints to recover Cogbucks for promotions on their Cashbot Cog Disguise. The Cogs in each mint are either level 10 or level 11, with level 11 Skelecogs also making some appearances. The boss of the facility is the Mint Supervisor, a level 12 Skelecog.

Each mint consists of 20 different floors, each with a different number of Cogs and obstacles, including stompers, rotating gears, lava/acid rooms with moving platforms and giant stompers. Toons would be transported to a random floor when entering a mint.

The Coin Mint is the shortest mint that consists of four to six sets of Cogs, totaling between 16 and 24 Cogs. The elevator leading to the Coin Mint is located on the left near the entrance to Cashbot Headquarters. It does not have a laff requirement. A Coin Mint can award 356-544 Cogbucks, which helps with earning promotions on low-level Cashbot Cog Disguises.

The Dollar Mint is a medium-length mint that consists of six to nine sets of Cogs, totaling between 24 an 36 Cogs. The elevator leading to the Dollar Mint is located in the middle of the railroad paths. It requires Toons to have at least 66 laff points to enter. A Dollar Mint can award 679-1,004 Cogbucks, which helps with earning promotions on mid-level Cashbot Cog Disguises.

The Bullion Mint is the longest mint that consists of nine to eleven sets of Cogs, totaling between 36 and 44 Cogs. The elevator leading to the Bullion Mint is located on the left side before the Cashbot Vault entrance. It requires Toons to have at least 71 laff points to enter. A Bullion Mint can award 1,202-1,496 Cogbucks, which helps with earning promotions on high-level Cashbot Cog Disguises.

Three of the following Cogs can appear in the Cashbot Mints.

There are many obstacles scattered around the mints. Toons must get past these obstacles to proceed to the next section. In every map, laff barrels give 8 laff and gag barrels randomly contain any type of gag, which is shown by the icon on the barrel. 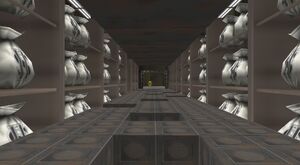 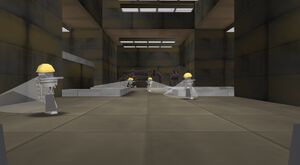 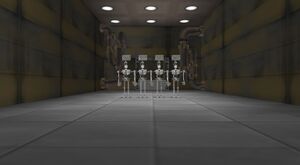 At the end of a mint, Toons will battle the Supervisor along with three other Cogs, all of which are level 11. Defeating the Supervisor and the three Cogs will award Toons with gag experience and Cogbucks. There are several possible layouts of the Supervisor's room:

When battling inside the mints, a Toon's gag experience is increased by a special multiplier, similar to Cog Buildings. The multiplier value is dependent on the mint a Toon is in.