"Toons, grab your pies! Pies, grab your filling! We're in an immediate need of all the toons we can get, along with their cream pie counterparts. Don't you understand? A Cashbot HQ has been discovered!"
―Lord Lowden Clear[src]

Upon entering Cashbot Headquarters, Toons will find themselves in the train yard. The train yard largely resembles a freight train yard or station filled with money. Toons may find Cashbot freight trains that deduct 10 laff points if they are crushed by them. There are three Cashbot Mints and the Cashbot Vault that can be accessed from this location. Cogs from level 7 to level 9 will roam around on the safe platforms. Toons may only cross to the next safe zone by crossing a railroad track. 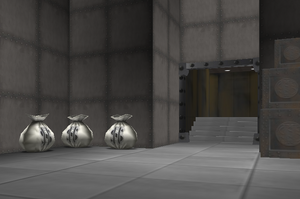 The Cashbot Mints are a Cog facility in Cashbot Headquarters. There are three types in order of difficulty: Coin Mint, Dollar Mint, and Bullion Mint. Cogs in the mints range from level 10 to level 11, with the Mint Supervisor being level 12. Upon completing a mint, Toons would teleport back to Cashbot Headquarters and obtain a certain number of Cogbucks. 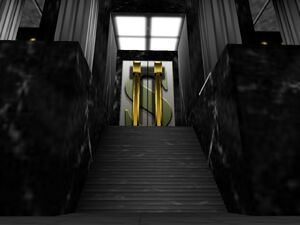 The Chief Financial Officer, commonly known as the C.F.O., is the boss of the Cashbots. Toons may battle him after completion of the Cashbot Cog Disguise and have earned enough Cogbucks for a promotion.

A unite is awarded to Toons that successfully defeat the Chief Financial Officer. Unites are special SpeedChat phrases that restock certain gags, heal laff points, or give jellybeans.

The Cashbot Cog Disguise is a Cog Disguise containing 12 parts. Each part is awarded upon completion of certain ToonTasks in Donald's Dreamland.

A Trolley traveling through the railroad tracks in Cashbot Headquarters.

A freight train in Cashbot Headquarters.

A Toon teleporting to Cashbot Headquarters using one of Doctor Surlee's portable hole bypasses as part of the Court Records puzzle.
Community content is available under CC-BY-SA unless otherwise noted.
Advertisement