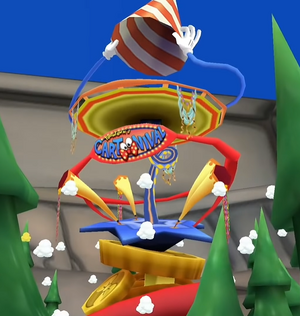 The Cartoonival Tower is a large tower of silliness found in the center of the Cartoonival Grounds. By throwing portable pies at dummy Cogs, Toons can speed up, slow down, and reverse the direction of the platforms around the tower. Inside the tower is where Token Takers sell all sorts of exclusive prizes.

The tower returned for ToonFest 2015 with a different design of a larger blue and red cupcake consisting of four locked doors, and giant ToonFest tokens placed on top replacing the pillow. Following ToonFest 2017, the logo was changed due to Toontown Rewritten's rebrand. The tower became the central location of where Toons can purchase brand new clothing, accessories, and other exclusive items.

In the 2.7.0 update released on December 15, 2020, assets for the event were updated to reflect the Cartoonival rebrand, with the new Cartoonival logo now appearing on the tower.

The ToonFest Tower's sign after the letter F fell off.

The "F" that fell out of the tower's sign that sits in front of a tree.

Transparent image of the "F".

Transparent image of the "F" from the back.
Add a photo to this gallery

Retrieved from "https://toontownrewritten.fandom.com/wiki/Cartoonival_Tower?oldid=111734"
Community content is available under CC-BY-SA unless otherwise noted.