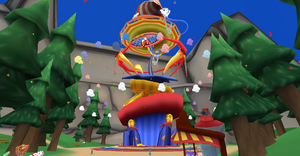 The Cartoonival Grounds is a festive area located in Chip 'n Dale's Acorn Acres that is known for where Toontown's Cartoonival takes place. Every year on September 19th, the area opens up for Toons to visit and party until October 20th.

The area is always filled with tons of confetti, and surrounded by multiple tall trees and a mysterious mineshaft off the top of the mountain. Minigame activities such as trampolines, cannons, and a duck tank can be played at the area. Within the area is a gigantic Cartoonival Tower in the center, a pie purchases booth, a merry multipliers booth, and a large fishing pond in the back. Cartoonival bags are also scattered around the area that offer jellybeans and Cartoonival tokens.

The Cartoonival Tower with rebranded tokens.

The tunnel with the ToonFest 2014 banner.

The original ToonFest Tower from the 2014 event.

The original ToonFest Tower with a "Finale Fireworks" show from the 2014 event.

The new ToonFest Tower with tokens.

A dummy Cog with the ToonFest Tower and the duck tank in the background.

The ToonFest Tower after it lost the letter "F" from its logo, which led to Riggy Marole's decision to give the event a brand new name.
Community content is available under CC-BY-SA unless otherwise noted.
Advertisement