Cannon Game is a Trolley minigame. It can be played by any number of Toons.

The objective is to change the angle on the cannon in order to get an accurate landing position into the water tower. If played with other Toons, any Toon who lands in the water is granted the same amount of jellybeans as the winner for all participants. A jellybean counter located in the upper right hand side of the player's screen slowly counts down and indicates the amount of jellybeans rewarded.

The following controls are default but can be altered from the Options menu based on the player's personal preferences. 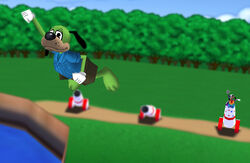 Retrieved from "https://toontownrewritten.fandom.com/wiki/Cannon_Game?oldid=115240"
Community content is available under CC-BY-SA unless otherwise noted.