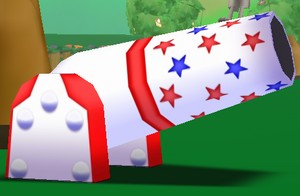 A cannon is an object that is used for many activities. Cannons appear in the Cannon Game, appear during the jury round of the Chief Justice battle, are used in the form of a pink slip, appear in parties, and appear in the Cartoonival Grounds. Cannons also appear at a Toon's estate for 48 hours after purchasing a rental item from Clarabelle's Cattlelog.

Unlike cannons used elsewhere, ones that are used for parties, the Cartoonival, and rented at an estate allow Toons to control their trajectory after they are fired out of them in order to hit a multitude of floating clouds within the surrounding area.