Camera bots were an invention of Doctor Surlee consisting of small, flying robots that filmed the Toon Council Presidential Elections. They were the basis of the footage that took place on Toontown Rewritten's official livestream for the election, as well as the Toon TV itself within the game.

Concept art by Piranha showing camera bots with many other election items.

Doctor Surlee's paper #2; "Only a little less than a month until the Elections start, and things are going great. I've managed to invent these little camera bots to fly around and record every single thing that happens during the event, as well as a big TV screen to display it all on."

Doctor Surlee's paper #4; "I've made it into the lab -- but it's not the lab I remember... They've even repurposed my camera bots as security Goons using the blueprints I left behind." 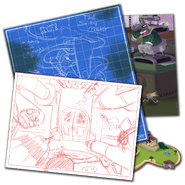 On the top right is a piece of concept art showing camera bots flying around the Chief Financial Officer.

The camera bots flying across Toontown Central with the Toon TV showing Professor Prepostera.
Add a photo to this gallery
Retrieved from "https://toontownrewritten.fandom.com/wiki/Camera_bots?oldid=88560"
Community content is available under CC-BY-SA unless otherwise noted.