Bossbots are one of the four branches of Cogs. They are represented by a brown emblem with a faded brown-striped necktie, symbolizing that they are on top of the overall corporate ladder. Their main base of operations, Bossbot Headquarters, is located off of Chip 'n Dale's MiniGolf, which is where their boss, the Chief Executive Officer, also resides. 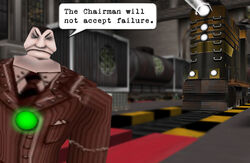 Head Hunters invade Toontown with a Mega-Invasion.
Add a photo to this gallery
Retrieved from "https://toontownrewritten.fandom.com/wiki/Bossbots?oldid=99808"
Community content is available under CC-BY-SA unless otherwise noted.