Bossbot Headquarters (also known as Bossbot HQ or BBHQ) is where the Bossbots reside. It is located behind Chip 'n Dale's MiniGolf at Chip 'n Dale's Acorn Acres. When visiting Bossbot HQ, you will find the Cog golf courses and the clubhouse. The theme of these headquarters are dark woods, evil, dullness golf, and the clubhouse is built like a dreary castle. It is not accessible in the game right now, as the Mystery Tunnel is standing where the Bossbot HQ tunnel is suppose to be.

Like inside the clubhouse, Version 2.0 Cogs reside in the Cog golf courses. They are Cogs who have two shells in which once defeated the first time, they turn into a Skelecog after.

The clubhouse is the banquet and the home of the Bossbots and the Cog boss, Chief Executive Officer. Upon finishing your Bossbot Cog Suit, you may enter the clubhouse. Upon entering, the Toons will be greeted by Good ol' Gil Giggles who will then instruct the Toons involved to battle special Cog Waiters, all of which are version 2.0 Cogs. These Cog Waiters wear special white-colored Cog suits, which you must take for yourself. After this, the CEO enters the kitchen, complaining that the waiters are taking too long to serve his banquet and orders them to serve the Cogs inside the dining room but little does he know that the Waiters are actually Toons in disguise. Good ol' Gil Giggles then tells the Toons that he poisoned the food the Cogs are about to receive, and instructs the Toons to feed as many Cogs as possible. When the Toons are done dining the Cogs, the CEO notices the waiters are Toons and sends any Cogs who are still alive to battle the Toons. Should the Toons succeed, the battle with the CEO himself will commence. During this phase, Toons can do two things: slow the CEO down by shooting golf balls at him from a safe distance, or attack him directly with seltzer bottles located on the tables. After the CEO is defeated, he will be demoted to a Flunky and the Toons will be rewarded Pink Slips. 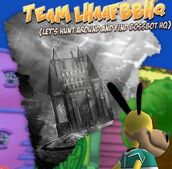 Part of a letter that was found by Team LHAAFBBHQ, which features a new Bossbot HQ.
Add a photo to this gallery
Retrieved from "https://toontownrewritten.fandom.com/wiki/Bossbot_Headquarters?oldid=42382"
Community content is available under CC-BY-SA unless otherwise noted.