"With help of Team LHAAFBBHQ's clues and the assistance of Toons across Toontown to crack the code of the Cog's top-secret MINGLERMAIL Memo Management, I must gravely announce that we have finally pinpointed the location of the dreaded Bossbot Headquarters."
―Lord Lowden Clear[src]

Bossbot Headquarters, commonly known as Bossbot HQ or simply BBHQ, is the Bossbots' main base of operation. It is located at Chip 'n Dale's MiniGolf in Chip 'n Dale's Acorn Acres. Bossbot Headquarters consists of three Cog facilities: the Cog Golf Courses, the Bossbot Clubhouse, and the Executive Office Tower. Inside the Bossbot Clubhouse is where Toons may find the boss Cog, the Chief Executive Officer.

The courtyard is the main area of Bossbot Headquarters. Cogs that roam the courtyard range from level 8 to level 10. An oil fountain is located in the center of the courtyard that deducts five laff points from Toons when colliding with the oil. Three Cog Golf Courses and the Bossbot Clubhouse can be accessed from the courtyard. The Executive Office Tower also has an entrance that cannot be accessed. 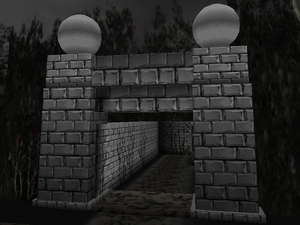 The Cog Golf Courses are where Toons often infiltrate to either defeat many Version 2.0 Cogs and obtain parts of their Bossbot Cog Disguise for Shep Ahoy's ToonTasks or to recover Stock Options for promotions. The Cogs in each course are either level 10 or level 11, with some being ordinary Cogs and some others being Version 2.0 Cogs. The miniboss Cog is the Club President, a level 11 Version 2.0 Cog. 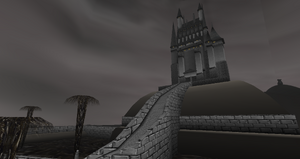 The Chief Executive Officer, commonly known as the C.E.O., is the boss Cog of the Bossbots.

A pink slip is awarded to Toons that successfully defeat the Chief Executive Officer. Pink slips instantly fire Cogs, including Version 2.0 Cogs, out of battle with a cannon. 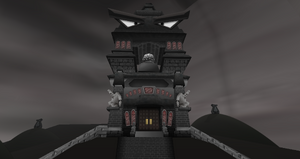 The Executive Office Tower is a large building located to the right side of the Bossbot Headquarters courtyard. Members of the Toon Resistance were unable to infiltrate the building, leaving its contents completely unknown. Security goons blocked all possible entrances, and peering through windows did not reveal anything other than several large elevators large enough to fit a boss Cog. Toons who attempt to enter the Executive Office Tower are left with a popup message saying they cannot enter due to security goons.

The Bossbot Cog Disguise is a Cog Disguise containing 17 parts. Each part is awarded upon completion of Shep Ahoy's ToonTasks.

The peculiar picture, with all of its pieces found by Team LHAAFBBHQ, put together to show Bossbot Headquarters.

Lord Lowden Clear in front of the Bossbot Clubhouse.

The tunnel leading to Bossbot Headquarters.
Community content is available under CC-BY-SA unless otherwise noted.
Advertisement