Bear is a Toon species.

When bears talk, they growl. If a bear uses an invalid word in SpeedChat Plus and lacks any True Friends, the word will be censored by "grr" or "growl". 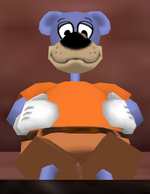 Notable bears include Bumpy Bumblebehr (Famous for being the Toon in the Chief Justice battle) and Paula Behr. (For making Bears into a Polar Bear)

Bears had the ability to become polar bears on Christmas by talking to Slappy or Doctor Surlee during the holiday. A polar bear is characterized by white fur, which is otherwise unobtainable.

Bears emit growls or roars when speaking. If a word is censored, they will be replaced with "grr" or "growl".

A bear turning white from Slappy at Toontown Central

A bear sitting at their estate
Add a photo to this gallery
Retrieved from "https://toontownrewritten.fandom.com/wiki/Bear?oldid=94676"
Community content is available under CC-BY-SA unless otherwise noted.