A Bean Counter is the fourth Cog on the corporate ladder of Cashbots. They range from level 4 to level 8.

Below are Cogbucks required to obtain every promotion for each Bean Counter level of the Cashbot Cog Disguise.

A "bean counter" is a slang term for a statistician or an accountant perceived as placing excessive emphasis on controlling expenditure and budgets. 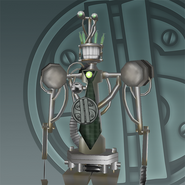