Outdated content
This page contains information about content that has been removed or no longer exists on Toontown Rewritten. Over the years, certain pieces of content end up being outdated. 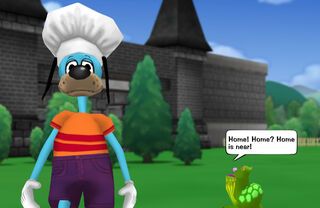 Barbecue Headquarters was an April Fools prank on April Toons Week in 2015 when Flippy announced that he supposedly discovered an area known as "BBQHQ".[1] This led Toons to believe that Bossbot Headquarters would be arriving. Instead, the dark charcoal tunnel became the entrance to ToonFest 2014 renamed as Barbecue Headquarters.

Retrieved from "https://toontownrewritten.fandom.com/wiki/Barbecue_Headquarters?oldid=78973"
Community content is available under CC-BY-SA unless otherwise noted.