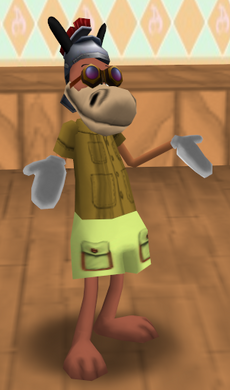 An animation is when a Toon presents some form of physical action that is meant to show emotion, which comes from its own "Animations" section in the SpeedChat menu. All Toons gain the first five animations listed below by default upon entering Toontown for the first time. The rest can be ordered from Clarabelle's Cattlelog, with the exception of the Resistance Salute.

Some SpeedChat phrases can make a Toon use an animation. For example, the Angry animation accompanies the phrase, "You stink!". Unites also have unique animations. Any phrase that uses an animation will display with the letter e.

Animations cannot be used while the Toon is already in an animated state. When this happens, the selections will be greyed out.

SpeedChat selections of the animations.

Animations for Toontown Rewritten (no audio)
A video showing off every animation.
Add a photo to this gallery
Retrieved from "https://toontownrewritten.fandom.com/wiki/Animation?oldid=86596"
Community content is available under CC-BY-SA unless otherwise noted.