"Do you hear a siren?"
―Ambulance Chaser

An Ambulance Chaser is the fourth Cog on the corporate ladder of the Lawbots. Their levels range from four to eight.

Ambulance Chasers can be seen roaming the courtyard at Lawbot Headquarters and also have a chance of appearing during the fight against the Chief Justice.

An ambulance chaser is a slang term for a personal injury lawyer who typically specializes in cases that involve suing a company or individual that may be responsible for physical affliction. 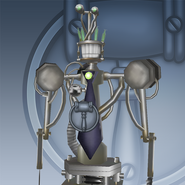 A level 6 Ambulance Chaser walking across the streets of The Brrrgh.

On February 13th, 2015 (which was a Friday), Version 2.0 and Skelecog versions of Ambulance Chasers took over several districts.

An Ambulance Chaser performing Hang Up.
Add a photo to this gallery
Retrieved from "https://toontownrewritten.fandom.com/wiki/Ambulance_Chaser?oldid=108627"
Community content is available under CC-BY-SA unless otherwise noted.