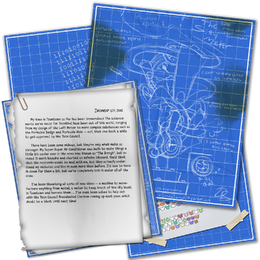 The development of Toontown Rewritten included an ongoing Alternate Reality Game (ARG) filled with mysterious blueprints, encrypted clues, puzzles, and development previews. The Toontown Rewritten Team frequently revealed clues relating to the storyline, in a wide variety of media formats. Some were riddles, others were encrypted messages, sometimes hidden clues were even found in images on the TTR website. Over time information was put together collectively, and many fan theories spurred from different possible ideas. The ARG is ongoing, and we're still not entirely sure what all of it means.

With the coming of alpha, Joey19982 began to hint at a new story line within Toontown Rewritten. The staff then began to release segments of images, of which the players speculated to be something of importance to the release of the game. Eventually the players realized that the pictures being shown were all part of the same, larger image. Speculation then began on what significance the monkey, and the rest of the image, had to Toontown Rewritten.

Regular changes in Joey's user title on MMOCentralForums lead to many guesses by the player population. Eventually the group of puzzle solvers came to a consensus that the puzzle was Gyro Gearloose's lab, and that the assumption was that the orange monkey was indeed Doctor Surlee.

The clues and puzzles ending on the image of Doctor Surlee in Sellbot Headquarters with the machine that created the Cogs behind him was a major cliff-hanger, and hundreds of theories were posted on the forums between the discovery and the announcement of Alpha. The second discovered image appeared again in A Big Surprise All 'Fa You!. The blog post marked the start of Alpha testing, Daily Alpha Updates and Super Saturday Updates. The very last sentence of the news post was "Time is ticking." which is a phrase Joey has used many times before in his forum posts on MMO Central Forums, including his first major clue post of the puzzle piece...

On October 28, 2013 03:45 PM, the Toontown Rewritten staff began their initial Alpha Testing phase. This included a blog posting, with an image of Doctor Surlee holding a gauge. It began what was to become the many speculations that Toons would make about the story of Toontown Rewritten.

Sir Max angered Jack O' Kazam by selling all his accessories via Clarabelle's Cattlelog. To get revenge on Sir Max and all the Toons who knowingly bought his accessories, he put Toontown under a spooky curse. Any Toon who goes Trick-or-Treating at all 6 participating shops would be put under the Pumpkin Head curse. The Halloween festivities lasted from about October 26 to November 1st. Jack O' Kazam is the only known wizard who haunts Halloween.

This update was not posted on the 26th and did not have particular significance to the overall ARG. However, there can be a possible chance that Jack O' Kazam may somewhat be related to the storyline.

The Christmas event began with a special addition on Toon-torial street. When a Toon exited Tutorial Tom's shop, after fighting the Flunky, they would be presented with the ability to speak to Doctor Surlee.

The big hint that Doctor Surlee said on Toon-torial street was[1]:

Slappy lives...
And we're going to save him.

The Christmas event wrapped up on the 26th, with the second annual Great Snowball Fight. This was originally an event ran by Slappy, and so it has significance to the overall Toontown Rewritten storyline. No new puzzles were released on this date.

On January 26th, 2015, the Toontown Rewritten team introduced a comic to their storyline. Team LHAAFBBHQ was to search for Bossbot Headquarters. These toons, hired by the Toon Resistance, went through a series of adventures over multiple weeks.

On April 18, 2015, Joey19982 went on the IRC to answer questions. Specifically, he spoke to the various questions players had after he changed the IRC topic to "OMG! Check out the blog at noon! (PST)". This snippet contains some of the questions Joey19982 answered on IRC.[3]

The primary mention of this webpage was a reoccurring message on IRC, in the #toontownrewritten channel, in which various Toontown Rewritten staff would paste the link into chat.

and on MMO Central Forums by Catstew:

Retrieved from "https://toontownrewritten.fandom.com/wiki/Alternate_Reality_Game?oldid=67277"
Community content is available under CC-BY-SA unless otherwise noted.