Since the beginning of Toontown Rewritten's development, a whole storyline was put together in forms of an Alternate Reality Game (ARG) consisting of mysterious blueprints, encrypted clues, puzzles, and development previews. Joey, along with the help of Scootz who organized a couple ARGs and Captain Sandy who created the blueprints, frequently revealed clues relating to the storyline in a wide variety of media formats. Some were riddles, others were encrypted messages, and hidden clues were sometimes even found in images on the website.

Over time, information was put together collectively, and many fan theories spurred from different possible ideas. To this day, many players of the Toontown community continue to come up with theories, and it is believed that the most important secrets of the storyline have yet to be revealed. 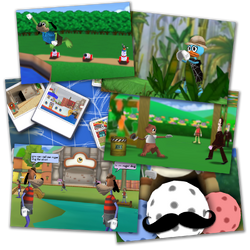 During the Alpha stage, blog posts were frequently posted on the Toontown Rewritten website for every daily update. Because the game had a huge lack of features at the time, the staff figured that they needed to keep the Toontown community entertained. Almost every blog post was written by Joey, leading to the birth of skeptical silly stories related to Sir Max and the rest of the Toon Troopers.

Some blog posts that were not even ARGs revealed hints related to the storyline. For example, several blog post images showed an unfamiliar Toon by the name of Slappy before he even made his debut in preparation for an upcoming event. The Toon Council Presidential Elections, an event that debuted the end of Alpha, was an important aspect of the storyline and had been mentioned long before the event was publicly announced by Alec Tinn. 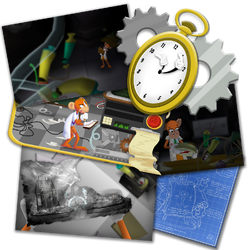 Toontown Rewritten's story has been revealed slowly over a number of blueprints and ciphers, most of which appear on the website. The very first ARG that was revealed on the website outside of MMO Central Forums was on November 26, 2013 (2002) by LL-TERMINAL43, which was the first blog post posted on the 26th. The 26th is an anomaly caused by Doctor Surlee's time travel where he traveled back in time to rewrite Toontown starting on October 26, 1998. Due to the imperfections of Doctor Surlee's unstable pocketwatch that he used to time travel with, unforeseen consequences arose ever since.

Two Toons that are referred to as "The Two" seem to have knowledge of the ripple effects, Doctor Surlee's experiments, and the flow of time. Their true identities had been unknown since their first appearance on April 26, 2014 (2003) until an ARG on January 26, 2018 (2007) where it was revealed that "The Two" are two versions of Doctor Fissionton, who are making an effort to warn Doctor Surlee about the anomaly he had caused.

To learn more about all of the blog posts and other interesting theories, visit the "Alternate Reality Game" category. This category consists of pages created by users of the Toontown Rewritten Wiki with information and answers. 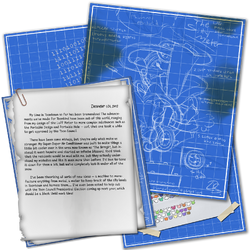 A couple methods of encryption like morse code or a Caesar cipher had been used for some of the blog posts related to the 26th. Occasionally, an ARG may even take place on another website created by Toontown Rewritten, such as mingler.org and its contents. Most of Doctor Surlee's mysterious blueprints also include extra encrypted text, which are found within the Toontown Rewritten website after decrypting a blog post. These blueprints showcase a drawing of particular inventions, such as the popular Silly Meter. Several letters of the past were also written with an attached blueprint of the Rewritten Device.

Retrieved from "https://toontownrewritten.fandom.com/wiki/Alternate_Reality_Game?oldid=92704"
Community content is available under CC-BY-SA unless otherwise noted.