Alec Tinn is an NPC cat Toon. He is most commonly known for being the host of every vote that goes on in Toontown, with the first event that he hosted being the Toon Council Presidential Elections.

Although Alec Tinn currently does not appear anywhere in Toontown, he made an appearance on the day of the Toon Council Presidential Elections, then made another appearance during ToonFest 2014 to offer Toons a ride on the ToonFest hot air balloon.

Before Alec Tinn became a well known figure to the citizens of Toontown, he invested in learning the arts of calculating the number of votes. After he had accidentally predicted the exact value of votes for a Cannon game construction, Alec realized that it was his calling and studied at Electoral College to earn his master's in his innovative major of "Compulsive Vote Adding Engineer".

"Come one, come two, COME ALL to the most important event in the history of our fair town: The Toon Council Presidential Elections!"
―Alec Tinn[src] 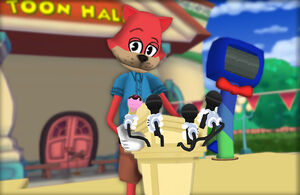 Alec Tinn was eventually appointed by the Toon Council to host the Toon Council Presidential Elections where Flippy and Slappy would run for president. Although Toons knew that there would be an election, Alec had not made his debut until February 15, 2014, where he announced that he would run the election. On that day, he and several Toon Troopers began preparing for the election by setting up some decorations all around Toontown Central, and kept all Toons up-to-date on the latest happenings with the election.

On the very day of the election, Alec Tinn walked on stage with Flippy and Slappy as they exited out of the Toon Hall. By using his special podium and set of microphones, Alec led his voice towards the audience where he analyzed the votes and announced the winner of the election being Slappy. Although the event was at first in good hands, a Yesman approached from the sky, and frightened Alec and the rest of the Toons. Right after Slappy was saddened and the Cogs unleashed an invasion to initiate Doomsday, Alec hid behind the Toontown Bank until the invasion was over, and later made an agreement with Doctor Surlee that Flippy was the only leader Toontown had left.

"My name is Alec Tinn, and I'm the one they have around here for every vote that goes on in Toontown."
―Alec Tinn[src]

Alec Tinn's duty as an eccentric elector was not over with the Toon Council Presidential Elections. Besides rare occasions like making a guest appearance for ToonFest 2014, Alec continued to host elections such as the Toontown Species Election, and counted ballots for them.

Alec Tinn announcing nominations for the the Toontown Species Election.

Alec Tinn announcing the first voting round of the Toontown Species Election.

Alec Tinn announcing the final voting round of the Toontown Species Election.

Alec Tinn standing next to Riggy Marole as he counts the ballots for ToonFest's new name.

Alec Tinn on stage during the Toon Council Presidential Elections.

Alec Tinn hiding behind the Toontown Bank during Doomsday.

Alec Tinn standing next to the ToonFest hot air balloon.
Add a photo to this gallery

Retrieved from "https://toontownrewritten.fandom.com/wiki/Alec_Tinn?oldid=116371"
Community content is available under CC-BY-SA unless otherwise noted.