The Great Silly Particle Search was an event that began on March 29, 2018. Professor Prepostera beforehand created a blog post on March 26, 2018 titled "Silly Street's Fire Hydrant Fiasco" about Loony Labs receiving numerous reports from Toons about a certain fire hydrant attempting to spring to life. Although this blog post was posted on the 26th, no sign of an anomaly had occurred, but this hinted towards something big happening.

A few days later, a blog post titled "The Great Silly Particle Search" was created by Doctor Fissionton announcing that he developed a formula to make Silly Particles appear visible that would be scattered all over Toontown for Toons to collect. 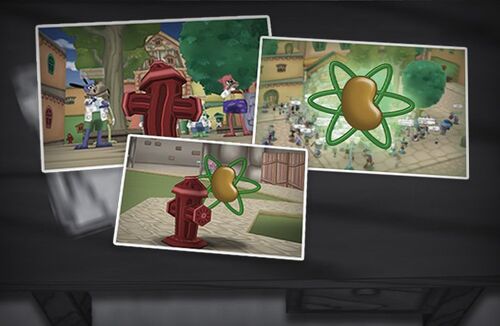 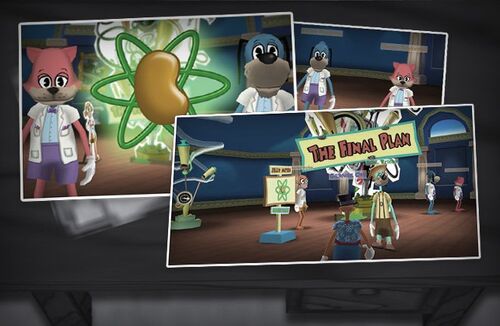 While Doctor Surlee teleported to see Doctor Fissionton, Professor Prepostera stopped by Silly Street to offer a brand new ToonTask that granted access to Doctor Fissionton's location: the secret door to the construction site of a brand new Toon Hall. This ToonTask required Toons to collect five of Professor Prepostera's access cards until the real one was found. Toons must had to complete this ToonTask before its expiration date on April 26, 2018.

Below are the exact locations of where each access card could be found.

After completing the ToonTask, Toons could enter the Toon Hall in which they would meet Doctor Surlee and Doctor Fissionton, accompanied by the Silly Meter and a large cardboard cutout with "The Final Plan" written on it. When Toons approached the Fissiontons, they had various dialogues discussing how they flicker due to time slipping away from them or vice versa, their final plan to help Doctor Surlee create a brand new Silly Meter, and that a new document had been posted on their terminal on LoonyLabs.net. They also offered a clue about "remembering" being the key.

This ARG started off with Doctor Surlee's blog post titled "The ToonTask to Save Toontown" that contained decrypted text at the bottom with certain bolded letters. By using a Vigenère cipher and the clue offered by Doctor Fissionton, the decrypted text reads:

Using the bolded letters in the same positions, an anagram for memento was found, which was the password to the new "Memories" folder in Doctor Fissionton's terminal, LL-TERMINAL26. Entering the password reveals the below message:

Input the "ls" command to find two image files. At this point, only the Chalkboard image can be opened without the need of a password. 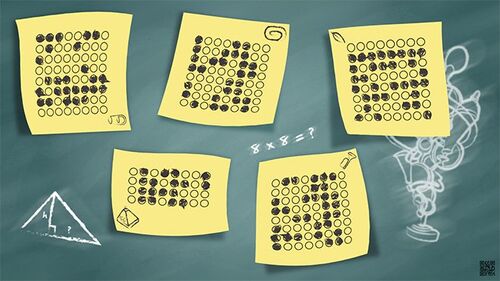 By converting the above binary to ASCII, random strings of text are given:

The question mark on the triangle from the bottom left points to the base. The math equation on the upper right equals 64. This means that the next clue relates to base64. Inputting the five strings of text altogether onto a base64 decipher reveals bravery-in-times-of-trouble as the password for the next image, "The Center Silo". 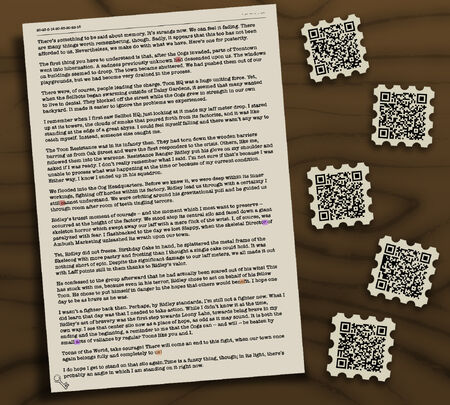 As stated previously, entering the password reveals the above image. The first thing that is noticeable on the image is six QR codes. Using a QR scanner, the following images were found from Toontown Rewritten's website.

With six images, they can be arranged into three different pairs. 1A and 1B becomes 1AB, 2A and 2B becomes 2AB, and 3A and 3B becomes 3AB. The pairs can then be matched up with the highlighted letters (which spells "acreas" but can be rearranged to "caesar") on the Center Silo. The words found are as followed:

The red and green circles hinted that something is up with Doctor Surlee's terminal, LL-TERMINAL43. By entering the password, sillyness, a text file called "Grocery List" and a folder called "Experiments" are revealed. The Grocery List on LoonyLabs.net was left with nothing but underscores on a numbered list indicating that there are three items. Words were matched up from the Center Silo, providing the following:

Referring back to the highlighted letters, it reveals that the Center Silo is a puzzle involving a Caesar cipher. Two other things that are noticeable from the Center Silo is morse code on the top right, and a key to the letters of the alphabet on the bottom left. Decoding the key reveals "twentytwo", and the morse code reveals "twoney". By using a Caesar decoder to input "22" as the shift and "twoney" as the key, the password for the Experiments folder is revealed to be savingforlater.

Entering the password reveals four documents. Every document with the exception of one document titled "The Pocket Watch's Flaws" does not require a password. The Grocery List has the passwords in order that are needed to access the documents.

Retrieved from "https://toontownrewritten.fandom.com/wiki/ARG:_The_Great_Silly_Particle_Search?oldid=104396"
Community content is available under CC-BY-SA unless otherwise noted.